Happy Mother’s Day, Whether You Like It or Not!

Have you called or visited your mother this fine Mother’s Day? No? Why not? Perhaps because you think it’s not necessary to keep telling her every year how much you appreciate her.

More than likely, if you answered “No” it’s because you don’t feel she deserves recognition. A lot of people feel that way, so you’re not alone. 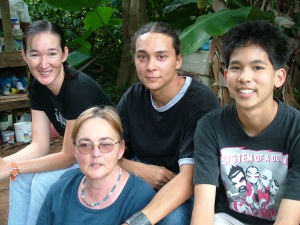 Daughter Suzanne, Son Cayce, Grandson Isaac and me. Mother’s Day 2004, the last time I was with all of them for this holiday.

I am not unique, but at 66 years of age, I am rich in life experience. I know we all tend to make a lot of assumptions. Perhaps the things I have learned may give you food for thought about your assumptions, make you reconsider your view of your own mother.

I am an adoptee who was fortunate to know and have a relationship with my birth mother. My adoptive mother was a frustrated career woman who stayed home to raise a family because that was what was expected of her. Partially as a consequence of that, our relationship was not the greatest. I am also a mother… and a grandmother. Let me share some motherhood truisms and my responses to them, based on my life experience.

“Mothers who give their children up for adoption do so because they don’t want them.” That’s what I thought. My mother didn’t believe in abortion. She also honestly believed she could not offer a child a decent life. My mother gave me up because she loved me, not because she didn’t. In retrospect, I think most women who do as she did do it for the same reason. One result of that decision in my mother’s case is she suffered from depression much of the rest of her life. It was a miracle she didn’t turn to drink to deaden that pain. She knew many women who had dealt with the guilt, shame and longing by taking refuge in alcohol and drugs.

“Being a mother is natural to women, so any woman who doesn’t take to motherhood is defective.”  That is what women have been told since time immemorial. It’s a crock. Motherhood is no more a natural state for every woman than fatherhood is for every man. Some people don’t take to parenthood like a duck to water. Women forced into motherhood by society’s mores have a hard life. They love their kids. They do the best they can. But in the case of women who are more suited to careers, there is always that part of them that wonders what might have been, what good they could have done in the world, what kind of a life they would have had if they’d followed their instincts instead of living by someone elses standards. I know. As they say, “Been there. Done that. Got the lousy t-shirt.” I didn’t love my kids any less than women who took to motherhood with gusto. I was confused and frustrated with myself for my ineptitude. I felt like I was a total loser because I couldn’t seem to get anything right. I just really looked forward to them being grown up and on their own. Guess what? You can’t imagine how much I miss them now that they have lives of their own far from me.

Here’s a bonus for you: “Babies don’t come with instruction books!” You know why? Because each child is different, as is each family dynamic. There have been all kinds of books written on  mothering. Experienced mothers are usually very willing to share their successful experiences. Sometimes all those things help, in a general way. But when you get right down to it, mothering is something that needs to be customized for each mother/child pair. There are no set rules that cover every pairing or every child. Bottom line is, it’s always a seat of the pants proposition. Sometimes… make that a lot of the time… the advice offered does more to muddy the waters than it does to help. So don’t be too quick to judge your mother’s skills. She probably was like me. Sometimes I did a good job. Sometimes I was a total failure. I did the best I could with the information and resources I had at hand. I tried my best… and that’s all you can ask of any parent.